Book review, from an author’s perspective – by David S. Moore 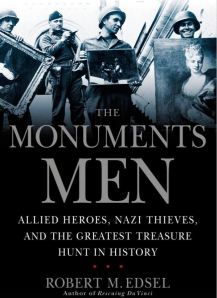 The Monuments Men by Robert Edsel

I recently read the book “The Monuments Men” by Robert Edsel.  It’s about the people who, during World War II, found and rescued thousands of pieces of art that had been appropriated by the Nazis.  Prior to the invasion of Belgium, Hitler dispatched art historians and other experts to the great museums of western Europe.  These scholars were to identify the highest valued artworks and to record their exact locations.  Hitler’s objective was to gather art from public and private collections throughout Europe and to sequester them until the end of the war.  Then, once the Third Reich had been firmly established, the art would be retrieved from its treasuries and would be displayed in a dazzling new museum to be built in Hitler’s hometown of Linz.

Mr. Edsel does a fine job of developing the backstory of each of the leaders of the Allied art rescuers.  And early on the reader has the sense that the book is really about a treasure hunt.  But the story lags in the first half of the book since in fact the men who were charged with finding and retrieving the stolen art were operating in a leadership vacuum.  As Mr. Edsel competently explains, the Monuments Men arrived in France on D-Day and quickly found that they had no equipment, no transportation, and no chain of command.  The only advantage they had was General Eisenhower’s mandate that any recovered pieces of art should be protected and returned to their rightful owners.  That they were able to capitalize on that to prevent the destruction or theft of the many thousands of artworks they found is a testament to their perseverance and ingenuity.

The clues were assembled slowly as the Allied forces battered their way through German defenses.  But the discoveries the Monuments Men made were truly astounding.  The Nazis were nothing if not efficient at absconding with artworks of every sort.

Aside from the fact that the story drags in the first half, this is an important book.  The Nazis, of course, were hellbent on annihilating Jews, Gypsies, and other undesirables in all of modern Europe.  And in their frenzy to pursue Hitler’s mad dream of an empire that would endure for a millenium they terrorized the entire population of Western Europe.  Should the Allies spend valuable time and resources trying to recover and protect art when the future of civilization was at stake?  Mr. Edsel provides a very compelling answer that yes, preserving art is an essential mission, even in the face of unimaginable evil.

Yes, the treasure hunt is interesting, the recovery operation was complex and challenging, and the details of their finds are astounding.  But the real story is the mission itself.  Saving the art that had been stolen from private citizens and public museums was an essential step in restoring the civilization of Europe.  It was just one part of an immensely challenging operation – but as Mr. Edsel demonstrates it was critical to the preservation of the European culture that Hitler had sought to destroy.

Find out more or purchase this book HERE

You can review a book for FreeValley Publishing’s site. Send your submission to: freevalleypublishing@gmail.com. Let us know what you’ve been reading and/or writing.