A sneak peek at author, Jearl Rugh’s upcoming YA chiller… THE DEEP

You can find out more about Jearl, The Deep, and his other thriller and mystery books at jearlrugh.blogspot.com or on google+

All fifteen-year-old Seneca wants when she sneaks out her bedroom window tonight is for Kyle to roast a marshmallow for her and maybe give her a kiss. Once out of the house, though, what seems at first like a threat to those she loves, leads her to discover the truth of what she really is. A truth she doesn’t like at all but is powerless to resist. 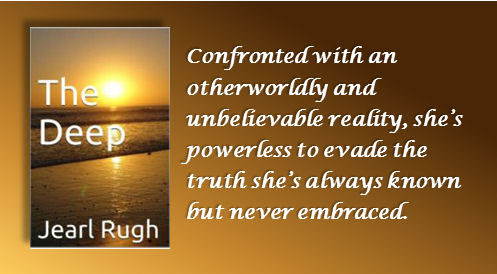 The sliver of light below the gap at the foot of my bedroom door had been dark for fifteen minutes when my feet hit the floor. From under the bed I pull the tan canvas-backpack I had filled this afternoon and carry it to the window. Grounded or not, I’ve got to bounce.

Several hours earlier, my walls plastered with posters of Ariana Grande, the North Shore Football Team, and Spider-Man, my tablet was connected to “Beast Lips.” A serial drama about teenage vampires, their quest is to drain the blood from all mortals in a rural Nebraska town. It was at the climax, the last five minutes, and, as I twirled a lock of my blond hair around my finger, my mom opened my door. If she knocked, I didn’t hear it with the driving music pounding through my earbuds directly into my head.

At first I only saw her mouth moving. So, since I’m not a lip reader, I ripped the buds from my ears. “Before you go to Brandy’s,” she said in a non-hostile tone, “clean your room.”

I didn’t need to shoot my eyes to the piles of clothes, girlfriend-notes, magazines, dirty dishes, empty soda cans and snack sacks, and whatever else might be growing underneath to know this would delay my departure to the point of unacceptable. Rather than bargain—“If you’ll let me do it tomorrow, I’ll also wash the dishes every night next week”—unfortunately, a phrase my parents hate flew into my head and rolled out of my mouth before my tongue could trip it up. “Ah shit.”

That pair of words no sooner left my lips than I knew I’d stepped in it, deep. I flicked my eyes toward her. I’m sure they registered as much shock as hers did astonishment and aggravation.

“Grounded?” I put as much dismay and disbelief in the unfairness into my inflection as a fifteen year old girl can. “Mom, I have no idea what you think I said, but what I said was, ‘Uh, sit’ … here.” I even straightened the covers on the edge of my unmade bed and patted the place where I meant for her to park. “I want to tell you about my plans tonight.”

And they were big plans. Of course, I wouldn’t have told her everything. Mom says I’m too young for a boyfriend. She’s so wrong.

Me and Brandy have been BFFs since kindergarten. In fact, since before BFF was even a popular acronym. She has a brother two years older than us. While we were just kids, Kirk was a major annoyance, but about a year ago, my heart began to feel him in a different way. He has the cutest dimple, just on one cheek. Unfortunately, since we practically grew up together, he saw me as just his sister’s friend—at least it felt that way. At school, when I’d see him walking toward me, my stomach would churn like a flock of startled egrets just took flight. I’d toss him a smile anyway, but I may as well have been a stain on the wall. He’d just turn to his friends and walk on by. Until yesterday.

He’s a first string tight-end—whatever that is—on the varsity football team. And yesterday I was sitting on the grass at the edge of the field watching them practice. When he catches a pass, he runs down the field as graceful as a seagull riding an ocean breeze. After they were done, Kirk headed over to me—straight to me—and with his famous crooked smile said, “Hey some of the guys are having a beach party tomorrow night. Do you want to come?”

I knew what I wanted to say and it wasn’t the two words that came out. “… Sure … thanks.” Ugh! How lame, I thought, and, once Kirk left, I punched my fist into the grass several times to punctuate the syllables, Girl you’re so lame.

But since then, my mind has blown up. I love the beach at any time, but at night with a bonfire the tranquility gives me sensory overload: the endless roll of the waves, the fragrance of fresh smoke, a crackle giving birth to a spark that rides the heat waves, the breeze’s caress on my cheeks, and the feel of my toes digging into the cool moist sand. Except for eating pizza—and being in love—there’s no better feeling. Tonight, though, Kirk would have stoked that fire and maybe roasted me a hotdog. I could just feel the warmth of my hand in his while we sat in the sand around that fire and maybe even his lips on mine when the party was over.

But as I watched my mom now yelling at me, I knew the rest of my life was in ruins. “I know what you said, and it wasn’t ‘Sit.’ You’re grounded. That’s final.”

Before Mom slammed the door behind her—which gave me the strong impression it was her intention I spend the entire weekend imprisoned right here—she confiscated my phone from the bed beside me and ripped my tablet right out of my grasp. This left my bedroom a total technological wasteland. How rude. Parents sometimes just suck the marrow right from your bones. How was I to tell Kirk I would be … delayed?

Over the next few hours, tears flowed with angry sobs—mostly at myself. I was so upset that even when my younger brother, Madison, knocked with a dinner tray, I refused to open the door. I couldn’t even say, “Leave me alone.” Who wants food when my heart ached knowing my future was mapped out in the sand at the shore and then a huge wave washed it all away?

Now at the window, unlatching the lock, with a quick and silent upward tug, the fresh night air pours over my face. In the distance, the roar of ocean breakers hums like a well-tuned engine and my tongue tastes the salty air. It’s such a relief to sense the freedom only steps away. I blow out a breath like I’m extinguishing a match and then unfasten the window screen.

by Jearl Rugh – All Rights Reserved